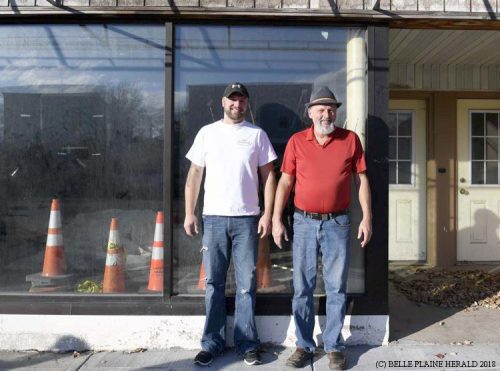 The father-son pair’s Belle Plaine roots run deep, and those roots, Oldenburg said, inspired the two to want to leave their mark on the town. For Oldenburg, whose family is as German as they come, opening his own restaurant was his straight shot on the Autobahn for doing so.

“This is really about establishing that legacy,” Oldenburg said, “and, obviously, we like beer.”

But “like” might be an understatement. As a home brewer and five-year employee for a brewery equipment distributor, Oldenburg has studied the bubbly beverage inside and out and has done his homework into what makes breweries successful. Having visited countless breweries  through his job and taken notes pertaining to their operation, Oldenburg feels prepared to dive head first into the establishment.

“Working with other startup breweries is where I harnessed my passion, I think,” Oldenburg said. “This is one of those ideas that just came naturally.”

So what’s the big idea? The Oldenburg men aim not only to transform the 6200 square foot shell of a building at 116 W. Main St. into a family-friendly hangout; they want to do so with operating locally in mind. For their establishment, it’s all in the name “brewpub.”

A brewpub, Oldenburg said, differs from a classic brewery in a few ways, most notably in the fact that they serve food. The food to be served at Oldenburg Brewing Company brewpub will come in the form of small plates—well, except for the giant pretzel the establishment will serve.

“I think every city has the ability to support a craft brewery,” Oldenburg said, “and it’s important to know where your stuff is coming from.”

Oldenburg acknowledged that many in Belle Plaine might not have an extensive knowledge of craft beer. This, he said, means there is a great opportunity to share his passion for the beverage. For those new to the brew, Oldenburg plans on walking them through the flavor profiles of any beer they may have questions about. For a new drinker, he might not reach for a double IPA—that’s an India Pale Ale—and instead might pour a lighter wheat ale, or even a fruit beer. Offering variety will be no feat, given that the Oldenburgs plan on tapping 10-12 varieties of beer at one time, with three or so flagship beers being served year round.

“We’re going to be involved with our guests,” Oldenburg said. “When you come in, I’m going to ask you what flavors you like.”
But Oldenburg Brewing Company plans on meeting the needs of those with serious beer chops as well. For those individuals—or for anyone interested, actually—there will be what Oldenburg called, the “Founder’s Club,” a group of members-only patrons who will get special access to new brews through tasting events, as well as other perks such as discounts on food.

Despite the prestige this group offers, the Oldenburgs don’t want the impression to be that the group is, in any way, elitist and instead stated the group is for those who want to take their brewpub patronage even further.
Oldenburg noted that his family is rallying behind him and his father over the opening of the brewpub, despite everyone, most notably Oldenburg’s wife, not even liking beer. Through the business, Oldenburg said, he hopes to convert her one day.

“If I can get her to like beer, I can get anyone to like beer,” Oldenburg said.
Oldenburg already has major ideas for the future of the brewpub, but - you guessed it - he wants to keep those plans a surprise.